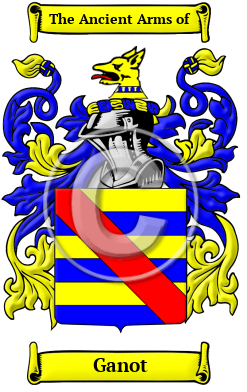 The name Ganot arrived in England after the Norman Conquest of 1066. The Ganot family lived person who was "gaunt," [1] as in Shakespeare's character John of Gaunt in Richard II "Oh how my name befits my composition! Old Gaunt, indeed, and gaunt in being old." Another more credible origin of the name is having derived "from the town of Gaunt, now Ghent, in Flanders." [2]

This source continues "Gilbert de Gand or Gant, a great Domesday tenant, was son of Baldwin, Earl of Flanders, whose sister William the Conqueror married." [2]

"Few among the Conqueror's companions of arms were so splendidly rewarded as Gilbert de Gand, who held one hundred and seventy-two English manors." [3]

"Among the soldiers of the Conquest, few were more largely rewarded than Duke William's nephew, Gilbert de Gaunt, son of Baldwin, Earl of Flanders, and it is therefore very unlikely that his name should be altogether omitted in the Roll of Battle Abbey. At the period of the general survey, we find Gilbert de Gant possessed of Manors in the counties of Berks, Oxford, York, Cambridge, Bucks, Huntingdon, Northampton, Rutland, Leicester, Warwick, Notts, and Lincoln, in all a hundred and seventy- three lordships, of which Folkingham was caput baroniae. Like most of the great lords of his time, Gilbert disgorged a part of the spoil, thus acquired, to the Church, and amongst other acts of piety, restored Bardney Abbey, in Lincolnshire, which had been destroyed by the Pagan Danes, Inquar and Hubba. " [4]

Early Origins of the Ganot family

"This family is mentioned as early as 1153-1194 in the Durham "Bolden Buke" where it is said the 'Gilbert the Chamberlain held the service of Ralfe Caunt, of Bursebred, in exchange for the Isle of Bradbere.' In Bishop Hatfield's time (1345-1381) Henry de Kaunt held lands in Kyo. " [6]

Maurice le Gant (died 1230) was the founder of Beverston Castle in Gloucestershire in 1225. The Hundredorum Rolls of 1273 had numerous entries for the family: Hugh le Gant and John le Gant in Oxfordshire; Gilbert le Gaunt in Cambridgeshire; Robert le Gaunt in Lincolnshire; and Henry le Gaunt and Maurice de Gaunt in Somerset.

Early History of the Ganot family

This web page shows only a small excerpt of our Ganot research. Another 96 words (7 lines of text) covering the years 1219, 1340, 1399, 1685 and 1685 are included under the topic Early Ganot History in all our PDF Extended History products and printed products wherever possible.

A multitude of spelling variations characterize Norman surnames. Many variations occurred because Old and Middle English lacked any definite spelling rules. The introduction of Norman French to England also had a pronounced effect, as did the court languages of Latin and French. Therefore, one person was often referred to by several different spellings in a single lifetime. The various spellings include Gaunt, Gant, Kaunt and others.

Outstanding amongst the family at this time was Elizabeth Gaunt (died 1685), an English woman from London sentenced to death for treason for involvement in the Rye House Plot. She was the wife of William Gaunt, a yeoman of the parish of St. Mary's, Whitechapel. "She was an Anabaptist, and, according to Burnet, spent her life doing good, 'visiting gaols, and looking after the poor of every persuasion.' In the reign of Charles II she had taken pity on one Burton, outlawed for his part in the Rye House plot. Though she was a poor woman, keeping a tallow-chandler's shop, she...
Another 134 words (10 lines of text) are included under the topic Early Ganot Notables in all our PDF Extended History products and printed products wherever possible.

Migration of the Ganot family

Many English families left England, to avoid the chaos of their homeland and migrated to the many British colonies abroad. Although the conditions on the ships were extremely cramped, and some travelers arrived diseased, starving, and destitute, once in the colonies, many of the families prospered and made valuable contributions to the cultures of what would become the United States and Canada. Research into the origins of individual families in North America has revealed records of the immigration of a number of people bearing the name Ganot or a variant listed above: Peter Gaunt who landed in Lynn, Massachusetts in 1637; Robert Gaunt settled in Virginia in 1637; John and Ann Gaunt, who came to New York State with seven children in 1823.