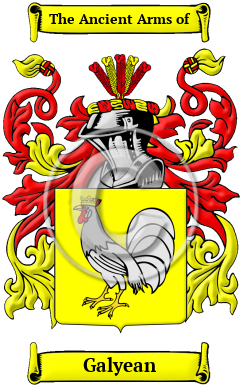 Early Origins of the Galyean family

The surname Galyean was first found in Rome (Italian: Roma), the capital of the Kingdom of Italy. Little can be said in the space available which would do justice to the history of this beautiful city. From 1000 B.C, its history is a book of life itself. The buildings, culture, arts, cathedrals, churches, museums galleries hold untold treasures unequalled anywhere else in the world. In those ancient times only persons of rank, the podesta, clergy, city officials, army officers, artists, landowners were entered into the records. To be recorded at this time, at the beginning of recorded history, was of itself a great distinction and indicative of noble ancestry.

Early History of the Galyean family

This web page shows only a small excerpt of our Galyean research. Another 81 words (6 lines of text) covering the years 1728, 1805, 1728 and 1753 are included under the topic Early Galyean History in all our PDF Extended History products and printed products wherever possible.

Prominent among members of the family was Giovanni Andrea Battista Gallini called Sir John (1728-1805), Italian dancing-master, "born at Florence on 7 Jan. 1728, emigrated to England in an almost destitute condition about 1753, in which year he made his debut at the Opera House, Haymarket, as a ballet-dancer, and achieved a remarkable and rapid success, so that the next...
Another 60 words (4 lines of text) are included under the topic Early Galyean Notables in all our PDF Extended History products and printed products wherever possible.

In the United States, the name Galyean is the 14,909th most popular surname with an estimated 2,487 people with that name. [1]

Migration of the Galyean family