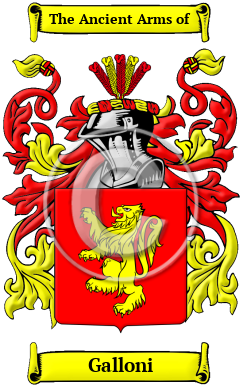 From the historical and enchanting Italian region of Tuscany emerged a multitude of noble families, including the distinguished Galloni family. During the Middle Ages, as populations grew and travel between regions became more frequent, the people of Tuscany found it necessary to adopt a second name to identify themselves and their families. The process of adopting fixed hereditary surnames was not complete until the modern era, but the use of hereditary family names in Italy began in the 10th and 11th centuries. Italian hereditary surnames were developed according to fairly general principles and they were characterized by a profusion of derivatives coined from given names. Although the most common type of family name found in Tuscany is the patronymic surname, which is derived from the father's given name, the nickname type of surname is also frequently found. Nickname surnames were derived from an eke-name, or added name. They usually reflected the physical characteristics or attributes of the first person that used the name. The surname Galloni is a name for a person with some of the attributes associated with a bird, such as a fine voice or sexual prowess. The name, which was also very popular in Spain during the Middle Ages, is derived from the Latin word Gallus which means rooster.

Early Origins of the Galloni family

The surname Galloni was first found in northern Italy which today incorporates the provinces of Cremona, Brescia, Pisa and the city of Florence. The earliest records of the surname Galloni date back to Florence, where the Galigai family can be traced to 1039.

Early History of the Galloni family

This web page shows only a small excerpt of our Galloni research. More information is included under the topic Early Galloni History in all our PDF Extended History products and printed products wherever possible.

Italian surnames come in far more variations than the names of most other nationalities. Regional traditions and dialects are a decisive factor in this characteristic. For example, northern names tend to end in "o", while southern in "i". Also important, but not unique to Italy, was the fact that before dictionaries and the printing press most scribes simply spelled words according to their sounds. The predictable result was an enormous number of spelling variations. The recorded spellings of Galloni include Galli, Gallo, Gall, Gallis, Gallelli, Gallello, Galletti, Galigai, Gallico, Galelei, Galladei, Galeota, Galizzi, Gallego, Gallini, Gallino, Gallucci, Galluccio, Galluzzi, Gallus, Galliussi, Gallozzi, Gallotti, Galloni, Gallone, Gallarini and many more.

Prominent among members of the family was Francesco Galeota, born in 1497 in Naples, who was a poet and a nobleman. Eighteen members of the Galilei family of Florence became priests between 1381 and 1528. Giulio Cesare la Galla (1576-1624), was Professor of philosophy at the Collegio Romano in Italy. Maria Domitilla Galluzzi (1595-1671), was a Catholic mystic. Girolamo da Santacroce Galizzi was a Venetian painter around 1510. Giovanni Gallego was a Baron, was Governor of Siena in 1540, and owned the castle of Salvatore in Messina. One very well known member of this lineage was Galileo Galilei, the physicist and...
Another 208 words (15 lines of text) are included under the topic Early Galloni Notables in all our PDF Extended History products and printed products wherever possible.

Migration of the Galloni family

In the immigration and passenger lists a number of early immigrants bearing the name Galloni were found: Domenico Gallo, who settled in Philadelphia, Pennsylvania, in 1836; Joseph Galli, who arrived in Philadelphia in 1878. Fortune Gallo, born in Torremaggiore in 1878, arrived in New York City at the age of 16 and founded the San Carlo Opera Company..