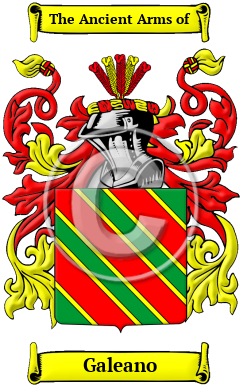 Early Origins of the Galeano family

The surname Galeano was first found in Castile, prominent among the Christian kingdoms of medieval Spain.

Early History of the Galeano family

This web page shows only a small excerpt of our Galeano research. Another 113 words (8 lines of text) covering the years 1475 and 1534 are included under the topic Early Galeano History in all our PDF Extended History products and printed products wherever possible.

Spelling variations of this family name include: Galindo, Galendo, Galíndez, Galindez and others.

Prominent among members of the family was Beatriz Galindo (1475-1534), lady-in-waiting to Queen Isabella. Beatriz was also a scholar and poet who published a commentary of Aristotle and...
Another 27 words (2 lines of text) are included under the topic Early Galeano Notables in all our PDF Extended History products and printed products wherever possible.

In the United States, the name Galeano is the 14,910th most popular surname with an estimated 2,487 people with that name. [1]

Galeano migration to the United States +

Galeano Settlers in United States in the 19th Century

Galeano Settlers in United States in the 20th Century