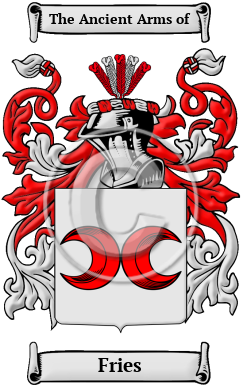 The surname Fries is name that may have a few different sources. In some instances it is derived from the name of the region of Friesland, and would refer to someone who came from that region. Friesland is located on the coast of the North Sea, and stretches from the Netherlands in the east to Denmark in the north. In the Swabian-Swiss dialects, the word "friesen" means "to dig ditches," and the name may have derived from the occupation of its original bearer.

Early Origins of the Fries family

The surname Fries was first found in Switzerland, where the name was an integral part of the feudal society which would shape modern European history. Many prominent branches of the family would strive to make this name renowned as they contributed to the social, economic and political affairs of the region.

Early History of the Fries family

Another 43 words (3 lines of text) are included under the topic Early Fries Notables in all our PDF Extended History products and printed products wherever possible.

In the United States, the name Fries is the 4,449th most popular surname with an estimated 7,461 people with that name. [1]

Fries migration to the United States +

Fries Settlers in United States in the 17th Century

Fries Settlers in United States in the 18th Century

Fries Settlers in United States in the 19th Century

Fries Settlers in Canada in the 18th Century