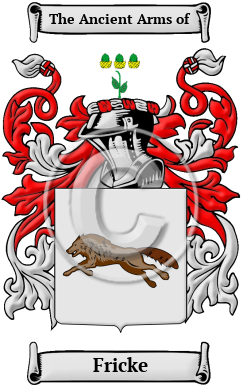 Early Origins of the Fricke family

The surname Fricke was first found in Germany, where the name Fricke came from humble beginnings but gained a significant reputation for its contribution to the emerging mediaeval society. It later became more prominent as numerous branches of the same house acquired distant estates, some of which were located in other countries. Through the acquisition of these estates as well as their important contributions to society, the family successfully elevated their social status. Like many surnames, the name Fricke is taken from a personal name which was very common at the time. Frick is a shortened form of Frederick, which is composed of the Germanic elements "fred," meaning "peace" and "ric," meaning "power." Like many personal names of the time, it owed its popularity to the fact that there was a saint by that name; Saint Frederick was the Bishop of Utrecht (in modern-day Holland) and worked to end paganism and idolatry.

Early History of the Fricke family

This web page shows only a small excerpt of our Fricke research. Another 74 words (5 lines of text) covering the years 1740, 1769, 1780, 1786 and 1798 are included under the topic Early Fricke History in all our PDF Extended History products and printed products wherever possible.

Spelling variations of this family name include: Frick, Fricke, Fricker, Frickel, Frickes, Fricks and others.

Notables of the time with the name Fricke included Philipp Joseph Frick or Frike, born near Würzburg May 27, 1740, originally organist to the Margrave of Baden, remarkable performer on the Harmonica. He travelled much from 1769, spending some years in Russia. He went...
Another 43 words (3 lines of text) are included under the topic Early Fricke Notables in all our PDF Extended History products and printed products wherever possible.

In the United States, the name Fricke is the 8,202nd most popular surname with an estimated 2,487 people with that name. [1]

Fricke migration to the United States +

Fricke Settlers in United States in the 18th Century

Fricke Settlers in United States in the 19th Century

Historic Events for the Fricke family +

Suggested Readings for the name Fricke +