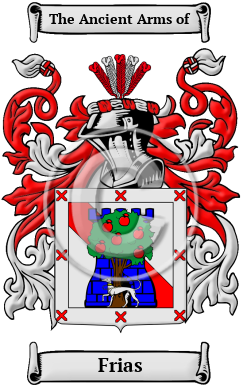 The Spanish surname Frias is of local origin, and is derived from the place where the initial bearer once lived or held land. Places named Frías can be found in two provinces in Spain, in Burgos (Castilla la Viaja) and in Cadiz (Andalucia). The word "frias" is derived from the Latin "frigiditas" which in Spanish became "frialdades" shortened to "frías" meaning "cold." This was a reference to the climate of the area which in ancient times was cold.

Early Origins of the Frias family

The surname Frias was first found in the northern regions of Castile, an important Christian kingdom in medieval Spain.

Early History of the Frias family

This web page shows only a small excerpt of our Frias research. Another 61 words (4 lines of text) are included under the topic Early Frias History in all our PDF Extended History products and printed products wherever possible.

Spelling variations of this family name include: Frias, Frisas, Frigas and others.

In the United States, the name Frias is the 3,755th most popular surname with an estimated 7,461 people with that name. [1]

Frias migration to the United States +

Frias Settlers in United States in the 19th Century