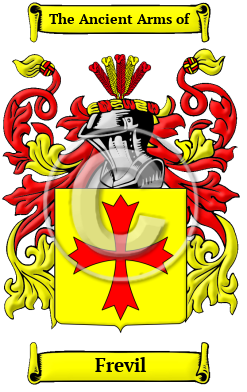 Early Origins of the Frevil family

The surname Frevil was first found in Staffordshire where Alexander Baron de Frevile, the lineal descendant of the Norman, married Joane, granddaughter and coheir of Sir Philip Marmion, and was great-grandfather of Sir Baldwin de Freville, who, in the 1st Richard II., claimed, as feudal Lord of Tamworth Castle, to be the King's champion on the day of his coronation; but the same was determined against him, in favour of Sir John Dymoke, in right of the tenure of Scrivelsby. The last direct male heir, Baldwin de Freville, died, in minority 6th Henry V., when his great possessions were partitioned among the husbands of his sisters; thus Sir Thomas Ferrers had Tamworth Castle, Sir Richard Bingham, Middleton in Warwickshire, and Roger Aston, Newdigate, in Surrey." [1]

Early History of the Frevil family

Before the advent of the printing press and the first dictionaries, the English language was not standardized. Sound was what guided spelling in the Middle Ages, so one person's name was often recorded under several variations during a single lifetime. Spelling variations were common, even among the names of the most literate people. Known variations of the Frevil family name include Freville, Fresville, Freevill, Freeville, Frevile, Frevill, Freefill, Frefill, Frevil, Freewill, Frewill, Freshville, Freschville, Freshfill and many more.

Outstanding amongst the family at this time was John Frescheville, 1st Baron Frescheville (1607-1682), an English soldier, landowner and politician who sat in the House of Commons between 1628 and 1665, Deputy Lieutenant of Derbyshire (1630-1642.) George Freville (d. 1579), was an English...
Another 42 words (3 lines of text) are included under the topic Early Frevil Notables in all our PDF Extended History products and printed products wherever possible.

Migration of the Frevil family

To escape the political and religious chaos of this era, thousands of English families began to migrate to the New World in search of land and freedom from religious and political persecution. The passage was expensive and the ships were dark, crowded, and unsafe; however, those who made the voyage safely were encountered opportunities that were not available to them in their homeland. Many of the families that reached the New World at this time went on to make important contributions to the emerging nations of the United States and Canada. Research into various historical records has revealed some of first members of the Frevil family to immigrate North America: the name represented in many forms and recorded from the mid 17th century in the great migration from Europe. Migrants settled in the eastern seaboard from Newfoundland, to Maine, to Virginia, the Carolinas, and to the islands..