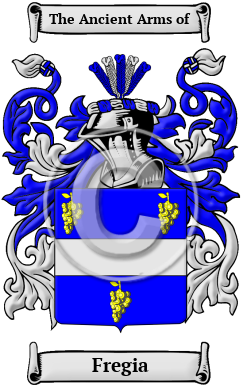 Early Origins of the Fregia family

The surname Fregia was first found in Languedoc.

Early History of the Fregia family

Notable amongst the family name at this time was Antoine-Ambroise Fregeac, a Benedictine monk born in Cros in 1618. He became administrator of Solignac in 1648, Abbot of Saint-Augustin in 1651 and 1654, Prior of Redon, Saint-Pierre de Mauriac, Saint-Jean d'Angély, Saint-Maixent, and La Chaise-Dieu in 1672, the year he died. Jean-Henri-Guy-Nicolas de Grandval, Marquis of Frégeville, born in 1748, was a general. Charles-Louis-Joseph de Gau, Marquis of...
Another 68 words (5 lines of text) are included under the topic Early Fregia Notables in all our PDF Extended History products and printed products wherever possible.

Fregia migration to the United States +

Fregia Settlers in United States in the 20th Century