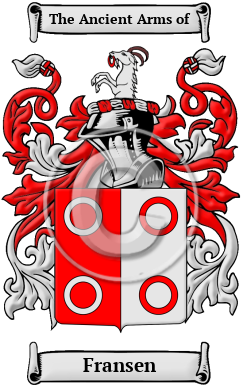 The surname Fransen is a ancient German name that originated in the Rhineland. While the Germans at first used only one name, population increases created confusion among people of the same name, forcing them to adopt hereditary surnames. Two common types of German names are patronymic names, taken from the given name of the father, and metronymic names, taken from the name of the mother. Fransen was derived from the baptismal name for the son of Franciscus. In the religious naming tradition surnames were bestowed in honor of religious figures or church officials. In Europe, theChristian Church was one of the most powerful influences on the formation of given names. Personal names derived from the names of saints, apostles, biblical figures, and missionaries are widespread in most European countries. In the Middle Ages, they became increasingly popular because people believed that the souls of the deceased continued to be involved in this world. They named their children after saints in the hope that the child would be blessed or protected by the saint. This was the case with the surname Fransen.

Early Origins of the Fransen family

The surname Fransen was first found in the Rhineland, where the family emerged in mediaeval times as one of the notable families of the region. From the 13th century the surname was identified with the great social and economic evolution which made this territory a landmark contributor to the development of the nation.

Early History of the Fransen family

This web page shows only a small excerpt of our Fransen research. Another 194 words (14 lines of text) covering the years 1713, 1780, 1815, 1827, and 1892 are included under the topic Early Fransen History in all our PDF Extended History products and printed products wherever possible.

In the medieval era, many different cultural groups lived in the German states. There are thus many regional variations of German surnames from that era. Westphalians spoke Low German, which is similar to modern Dutch. Many German names carry suffixes that identify where they came from. Others have phrases attached that identify something about the original bearer. Other variations in German names resulted from the fact that medieval scribes worked without the aid of any spelling rules. The spelling variations of the name Fransen include Franz, Frantz, Frants, Frannz, Franntz, Frannts, Frantzen, Fraenzel, Frenzel, Frentz, Frenz and many more.

Another 32 words (2 lines of text) are included under the topic Early Fransen Notables in all our PDF Extended History products and printed products wherever possible.

Fransen migration to the United States +

The great European flow of migration to North America, which began in the middle of the 17th century and continued into the 20th century, was particularly attractive to those from the Rhineland who wished to escape either poverty or religious persecution. Many of those who left the Rhineland to seek their fortunes in the prosperous and free New World settled in the major urban centers of the United States and Canada. In the United States, the settlers from the Rhineland passed through immigration centers like that of Ellis Island, most of them moving on to Pennsylvania, Ohio, Texas, Illinois, California, and New York. In Canada, the majority of Rhinelanders settled in Ontario and the prairie provinces. An examination of passenger and immigration lists has revealed many important settlers to North America bearing the name Fransen, or one of its variants above:

Fransen Settlers in United States in the 17th Century

Fransen Settlers in United States in the 18th Century

Fransen Settlers in United States in the 19th Century

Fransen Settlers in United States in the 20th Century

Historic Events for the Fransen family +