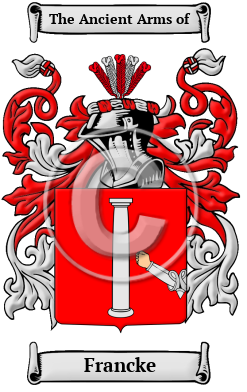 The surname Francke derived from the given name Francis. Although it began as a name indicating that the bearer was French in nationality, the popularity of the name Francis was greatly encouraged by the fame of St. Francis of Assisi in during the Middle Ages, and the meaning of the name was subsequently altered. This is also a name for a person from Franconia, which is a region of Southwestern Germany that was named after the Franks, who settled in this region after the fall of the Roman Empire.

Early Origins of the Francke family

The surname Francke was first found in Bohemia, where the name Frank became noted for its many branches within the region, each house acquiring a status and influence which was envied by the princes of the region. In their later history the name became a power unto themselves and were elevated to the ranks of nobility as they grew into this most influential family.

Early History of the Francke family

During this early period, notable bearers of the name Francke included Sebastian Franck (1499-1543), a freethinker and one of the first German historians; Johann Franck (Frank) (1618-1677), a German lyric poet and hymnist; and...
Another 33 words (2 lines of text) are included under the topic Early Francke Notables in all our PDF Extended History products and printed products wherever possible.

Francke migration to the United States +

Francke Settlers in United States in the 17th Century

Francke Settlers in United States in the 18th Century

Francke Settlers in United States in the 19th Century

Francke Settlers in Canada in the 18th Century

Francke Settlers in Canada in the 19th Century