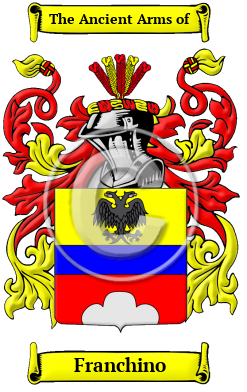 The surname Franchino comes from the same roots as the word "Franc," which was a name for a Germanic people known as the Franks, who inhabited the lands around the Rhine River in Roman times. In the 6th century, under the leadership of Clovis I, the Frankish tribe established a substantial empire in Europe, which later developed into the Holy Roman Empire. The popularity of this name as a Medieval personal name was in part due to St. Francis of Assissi (1181-1226), the Italian religious founder of the Franciscan Order.

Early Origins of the Franchino family

The surname Franchino was first found in Padua (Italian: Padova, Latin: Patavium, Venetian: Padoa), although there have been noble families of this name in Bologna, Cesena, Ravenna, and Verona since the Middle Ages.

Early History of the Franchino family

This web page shows only a small excerpt of our Franchino research. Another 69 words (5 lines of text) covering the years 1450, 1477, 1517, 1580, 1625, and 1776 are included under the topic Early Franchino History in all our PDF Extended History products and printed products wherever possible.

Spelling variations of this family name include: Franchini, Franchino, Francinni, Francini and others.

Another 37 words (3 lines of text) are included under the topic Early Franchino Notables in all our PDF Extended History products and printed products wherever possible.

Migration of the Franchino family