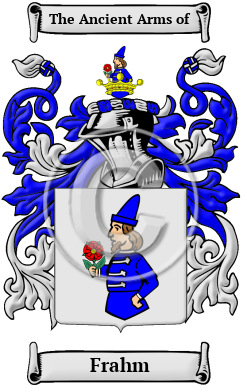 The roots of the distinguished German surname Frahm lie in the northern regions of Schleswig-Holstein. The name is derived from the Middle High German "vrame," meaning "competent, capable, upright, fit." It is likely that Frahm was originally bestowed as a nickname, and then passed down along the family line as a hereditary surname. The name is concentrated within the areas of Hamburg, Bremen, and Rostock, where the Low German dialect is spoken.

Early Origins of the Frahm family

The surname Frahm was first found in the Low-German speaking areas of North Germany, where the name first emerged. The earliest known bearer of the name was Vrome Johan, who lived in the Holstein region in 1343. The young Frahm family was instrumental during this early period, making major contributions to the development of medieval German society.

Early History of the Frahm family

This web page shows only a small excerpt of our Frahm research. Another 74 words (5 lines of text) covering the years 1343, 1495, 1690, 1779, and 1807 are included under the topic Early Frahm History in all our PDF Extended History products and printed products wherever possible.

More information is included under the topic Early Frahm Notables in all our PDF Extended History products and printed products wherever possible.

In the United States, the name Frahm is the 12,630th most popular surname with an estimated 2,487 people with that name. [1]

Frahm migration to the United States +

Frahm Settlers in United States in the 19th Century