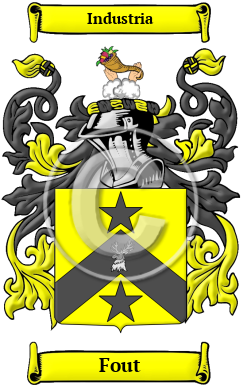 The distinguished surname Fout is of Scottish origin. It is derived from "Fiddes," the name of a barony once known as Fothes or Futhos located in Foveran, Kincardineshire. The name is thought to be derived from the Gaelic "fiodhais," meaning "wood-place." [1]

Early Origins of the Fout family

The surname Fout was first found in Kincardineshire, where the family claim descent from the old barony of Fides, anciently Futhos or Fothes, in the parish of Foveran. "Eadmund or Edmund de Fotheis and Alwinus or Aleuin, his son who witnessed two charters between 1200-1207, are probably the first recorded of the name. Fergus de Fothes, son of John de Fothes, received in 1289 from Alexander Cumyn, Earl of Buchan, a charter of the whole tenement of Fothes. Payments were made to John Fotis and to Walter de Fothes in 1328-9, Eustace de Futhes was collector of contributions in Aberdeenshire, 1373." [1]

Early History of the Fout family

Notable amongst the Clan at this time was Richard Fiddes (1671-1725), English divine and historian, the eldest son of John Fiddes. He was born in 1671 at Hunmanby, near Scarborough, but was brought up by an uncle who was vicar of Brightwell, Oxfordshire. "By him he was educated at a school at Wickham, near Scarborough. In October 1687 he...
Another 59 words (4 lines of text) are included under the topic Early Fout Notables in all our PDF Extended History products and printed products wherever possible.

Fout migration to the United States +

Fout Settlers in United States in the 18th Century

Fout Settlers in United States in the 19th Century