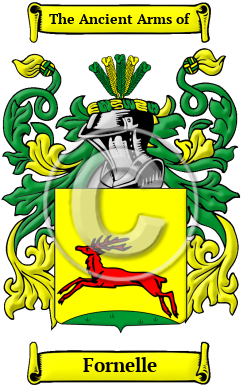 Early Origins of the Fornelle family

The surname Fornelle was first found in Anjou, a former county, duchy and province centered on the city of Angers in the lower Loire Valley of western France.

Early History of the Fornelle family

Notable amongst the name was the Fournier family of wood sculptors from Troyes. Antoine worked on the church Saint-Jean from 1591-1594. From another Fournier family, Georges Fournier was Chaplain in the Royal Marine around 1595; Henri-Alban (known as Alain) Fournier was an author, his most famous novel entitled "Le Grand Meaulnes". Claude-Joseph Fournel was a Dominican monk in 1646 in Decize (Nièvre); Philippe Forneret was a pastor in Koepenick after having emigrated to Germany around 1700; Marie-Nicolas Fournier was bishop of Montpelier around 1750; Charles Fournier was a painter in Salmaise in 1803; Claude Fournier...
Another 93 words (7 lines of text) are included under the topic Early Fornelle Notables in all our PDF Extended History products and printed products wherever possible.

Migration of the Fornelle family

Some of the first settlers of this family name or some of its variants were: 1400 individuals of the lineage who arrived onto Canadian shores from France between 1600 and 1900. Among these, Guillaume Fournier married in 1651 in Quebec.