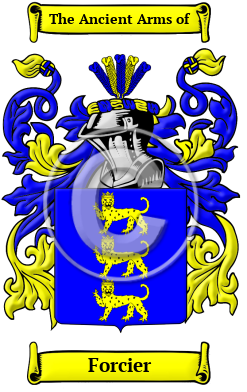 Early Origins of the Forcier family

The surname Forcier was first found in Dordogne.

Individuals sharing this heritage are cited as early as the seventeenth century, with Pierre De Forceville, born in 1654 in Douai, a philosophy professor who was named rector of Dinant. In 1721 he became Spiritual Director at Cambrai College.

Early History of the Forcier family

This web page shows only a small excerpt of our Forcier research. More information is included under the topic Early Forcier History in all our PDF Extended History products and printed products wherever possible.

Spelling variations of this family name include: Force, Forceville, Forcier and others.

Notable amongst the name at this time was Gedeon-Adolphe-Casimir De Forceville, born in Moulvis (Somme) in 1800, was a banker in Amiens and became judge at the court of commerce in this city. His interest in sculpture grew, and he showed some of his works at the Paris Salon. He finished a few large works: the statue of Pierre l'Ermite, in bronze, which is in Place S.-Michel in Amiens; the...
Another 70 words (5 lines of text) are included under the topic Early Forcier Notables in all our PDF Extended History products and printed products wherever possible.

Forcier Settlers in Canada in the 17th Century

Forcier Settlers in Canada in the 18th Century