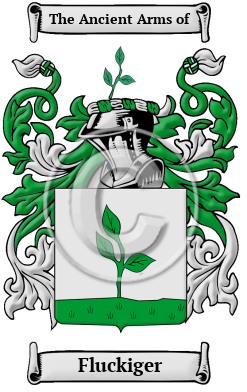 The roots of the distinguished German surname Fluckiger lie in the former duchy of Swabia. The name derives from the Middle High German word "vlicken," meaning "to patch," and was most likely originally borne by someone who patched shoes or fabric.

Early Origins of the Fluckiger family

The surname Fluckiger was first found in the duchy of Swabia. Martin Fluekk was one of the earliest recorded bearers of the name, residing in the city of Überlingen in 1294. The young Fluckiger family was instrumental during this early period, playing an important role in the development of the region's society.

Early History of the Fluckiger family

Another 28 words (2 lines of text) are included under the topic Early Fluckiger Notables in all our PDF Extended History products and printed products wherever possible.

Fluckiger migration to the United States +

Fluckiger Settlers in United States in the 18th Century