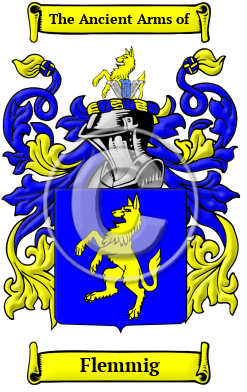 The German surname Flemmig emerged in the lands that formed the modern state of Lower Saxony, which is presently bordered by the North Sea, the Hartz mountains and the Elbe and Ems rivers. Lower Saxony was previously a medieval Saxon dukedom. The name Flemmig, which is a local surname, reveals that the original bearer of the name once lived, held land, or was born in this beautiful region of Lower Saxony. In the Holy Roman Empire, hereditary surnames were adopted according to fairly general rules and after the 12th century, names that were derived from localities became increasingly widespread. Local names originally denoted the proprietorship of the village or estate. When coupled with the German preposition von, which means from or of, local names can indicate that the bearer of the name was an aristocrat. However, in modern times, the von is frequently dropped from the surname. The Flemmig family originally lived in Flanders. In the Middle Ages, Flanders and other regions of the Netherlands enjoyed a considerable commercial intercourse with England, Germany and France. Consequently, many people from this region migrated to other European states.

Early Origins of the Flemmig family

The surname Flemmig was first found in Lower Saxony, where the family gained a significant reputation for its contributions to the emerging mediaeval society. The name became prominent as many branches of the family founded separate houses and acquired estates in various regions, always elevating their social status by their great contributions to society. The name originates from the German word "Flame" meaning flame. Individual bearers of the name first mentioned in ancient chronicles include Ilias Flammic in Cologne around 1135, Pilgrimus von Flemminch in Austria in 1287, Tham Flemmingen in Pomerania in 1295, Conrad Flemingen in Pomerania in 1315, Dyle zum Fleminge in Frankfurt around 1333. The variation Vlemming mainly appears in chronicles of northern cities such as Luebeck, Rostock, Stralsund, and Barth around 1300.

Early History of the Flemmig family

This web page shows only a small excerpt of our Flemmig research. Another 324 words (23 lines of text) covering the years 1609, 1640, 1700, and 1745 are included under the topic Early Flemmig History in all our PDF Extended History products and printed products wherever possible.

More information is included under the topic Early Flemmig Notables in all our PDF Extended History products and printed products wherever possible.

Migration of the Flemmig family

Some of the first settlers of this family name or some of its variants were: Richard Fleming, who settled in Virginia in 1635. Otto Flemming arrived in Philadelphia in 1868.