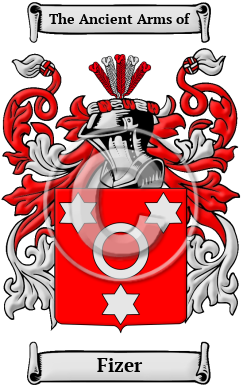 The Fizer surname comes from the Upper German word "pfister," which meant "baker." [1]

"Pistor is originally of the monastery, or Court, in contrast to the simple bread bakery, Latin panifex, finally a Baker at all. In Bonn, a pisternen street (now the star of street)" [2]

Early Origins of the Fizer family

The surname Fizer was first found in Bavaria and Saxony, where the name was anciently associated with the tribal conflicts of the area. They declared allegiances to many nobles and princes of early history, lending their influence in struggles for power and status within the region. They branched into many houses, and their contributions were sought by many leaders in their search for power including the branch at Grubnitz.

Early History of the Fizer family

Another 31 words (2 lines of text) are included under the topic Early Fizer Notables in all our PDF Extended History products and printed products wherever possible.

In the United States, the name Fizer is the 14,070th most popular surname with an estimated 2,487 people with that name. [3]

Migration of the Fizer family

Some of the first settlers of this family name or some of its variants were: Jacob Pfister, who came to Carolina in 1734; Andreas Pfister, who arrived in Pennsylvania in 1751; Beter Pfister, who settled in Philadelphia in 1754.