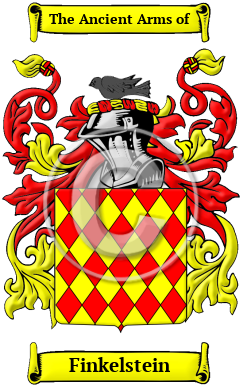 The name Finkelstein is a proud symbol of ancient Jewish culture. Before the late Middle Ages, people were known only by a single name. However, as the population increased and travelers set out on their journeys, it became necessary for people to adopt a second name to identify themselves. Jewish hereditary surnames were adopted from a variety of different sources. As a Jewish surname, the name Finkelstein derives from a variety of sources. It is thought to have been an occupational name, deriving from the German word finch, which referred to the bird, and would have been given to someone who raised or sold finches. Another possible origin is from the female given name Finkle, which was a popular name in medieval Germany. It could also be an ornamental surname deriving from the Old German word finkelstein, which means diamond. Lastly, the name could be derived from the Yiddish word funk, which meant spark. The word funkenstein translates as sparkle stone, or diamond.

Spelling variations of this family name include: finkleman and others.

In the United States, the name Finkelstein is the 8,654th most popular surname with an estimated 2,487 people with that name. [1]

Finkelstein migration to the United States +

Finkelstein Settlers in United States in the 19th Century