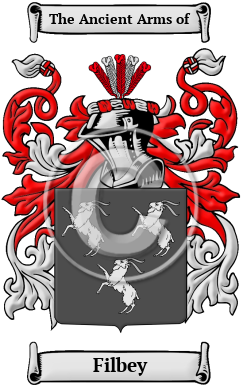 Early Origins of the Filbey family

The surname Filbey was first found in Norfolk at Filby, a parish, in the East and West Flegg incorporation, hundred of East Flegg. [1] This parish dates back to before the Domesday Book of 1086 where it was listed as Filebey. [2] Literally the place name means "farmstead or village of a man called Fili or Fila." [3]

Early History of the Filbey family

It is only in the last few hundred years that the English language has been standardized. For that reason, Anglo-Norman surnames like Filbey are characterized by many spelling variations. Scribes and monks in the Middle Ages spelled names they sounded, so it is common to find several variations that refer to a single person. As the English language changed and incorporated elements of other European languages such as Norman French and Latin, even literate people regularly changed the spelling of their names. The variations of the name Filbey include Filby, Filbey, Filbee, Filbie, Philby, Philbey, Phillbee, Fylbey, Fylby and many more.

Outstanding amongst the family at this time was William Filbie (c.1557-1582), an English Roman Catholic priest from Oxfordshire. " On 25 March 1581 he was ordained priest in the church of St. Mary at Rheims, by the bishop of Châlons-sur-Marne, and soon afterwards he returned to England upon the mission. He was apprehended at Henley while incautiously attempting to speak to Father Edmund Campion, who was being conducted to London with other prisoners (Simpson, Edmund Campion, p. 228). They were all committed to the Tower, 22 July 1581. Filbie...
Another 88 words (6 lines of text) are included under the topic Early Filbey Notables in all our PDF Extended History products and printed products wherever possible.

Filbey Settlers in Australia in the 19th Century