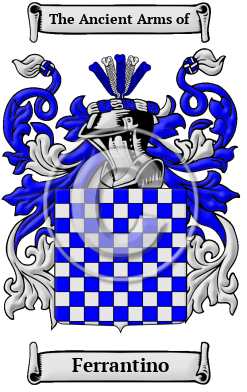 The Ferrantino surname comes from the Old French word "ferrand," meaning "iron gray," and is thought to have originally been a nickname, for someone with gray hair or for someone who dressed in gray. Some instances of the surname may have evolved from the Latin personal name Ferrandus.

Early Origins of the Ferrantino family

The surname Ferrantino was first found in Florence (Italian: Firenze), originally the capital of Tuscany, then capital of the kingdom of Italy. On the River Arno there are numerous Florentine Churches, Museums, Galleries. It dates back to 313 A.D. The history is complex and turbulent. The de' Medici family are the notables. They were expelled in 1494 but they returned in 1512, out in 1527 and then returned. In those ancient times only persons of rank, the podesta, clergy, city officials, army officers, artists, landowners were entered into the records. To be recorded at this time, at the beginning of recorded history, was of itself a great distinction and indicative of noble ancestry. The Ferranti family emerged as a notable when Ottenero was Governor of Florence in 1362. They became known as the Ferranti family of Ferrantini.

Early History of the Ferrantino family

This web page shows only a small excerpt of our Ferrantino research. Another 94 words (7 lines of text) are included under the topic Early Ferrantino History in all our PDF Extended History products and printed products wherever possible.

Surnames that originated in Italy are characterized by an enormous number of spelling variations. Some of these are derived from regional traditions and dialects. Northern names, for instance, often end in "o", while southern names tend to end in "i". Other variations come from the fact the medieval scribes tended to spell according to the sound of words, rather than any particular set of rules. The recorded variations of Ferrantino include Ferranti, Ferrantello, Ferrantelli, Ferrantin, Ferrantini, Ferrantino, Ferrante and many more.

Another 27 words (2 lines of text) are included under the topic Early Ferrantino Notables in all our PDF Extended History products and printed products wherever possible.

Ferrantino migration to the United States +

Ferrantino Settlers in United States in the 19th Century

Ferrantino Settlers in United States in the 20th Century