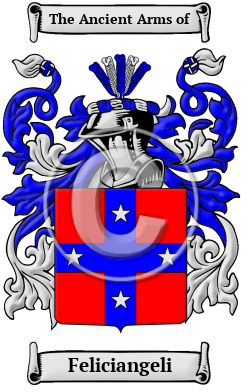 The surname Feliciangeli is a patronymic surname, created from the father's given name. During the Middle Ages, Italians adopted the patronymic system of name-making because it perfectly complemented the prevailing Feudal System. The name Feliciangeli came from the Latin word "felix," which means "happy."

Early Origins of the Feliciangeli family

The surname Feliciangeli was first found in Rome (Italian: Roma), the capital of the Kingdom of Italy, where Marcus Antonius Felix was a prominent member of the community, as he is known to have cleared the country of robbers.

Early History of the Feliciangeli family

This web page shows only a small excerpt of our Feliciangeli research. More information is included under the topic Early Feliciangeli History in all our PDF Extended History products and printed products wherever possible.

In comparison with other European surnames, Italian surnames have a surprising number of forms. They reflect the regional variations and the many dialects of the Italian language, each with its own distinctive features. For example, in Northern Italy the typical Italian surname suffix is "i", whereas in Southern Italy it is "o". Additionally, spelling changes frequently occurred because medieval scribes and church officials often spelled names as they sounded rather than according to any specific spelling rules. The spelling variations in the name Feliciangeli include Felici, Felice, Filice, Felise, Felis, Felisaz, De Felice, De Felici, Del Felice, Di Felice, Felicetti, Felicetta, Felicini, Felicioli, Feliciotti, Feliciani, Felician, Feliziani, Felicioni, Felisati, Felisatti, Feliciangeli, Felicitas and many more.

Prominent among members of the family was Giurarono Feliciani of Bologna was a part of the crusades in 1217. Enrichetto Feliciani was a member of government in 1291 in Bologna, and was also involved in planning...
Another 35 words (2 lines of text) are included under the topic Early Feliciangeli Notables in all our PDF Extended History products and printed products wherever possible.

Feliciangeli migration to the United States +

Analysis of immigration records indicates that some of the first North American immigrants bore the name Feliciangeli or a variant listed above:

Feliciangeli Settlers in United States in the 20th Century