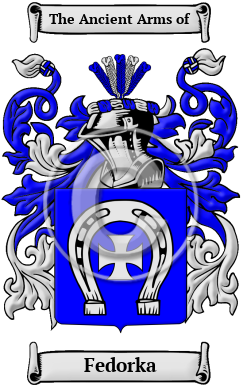 Early Origins of the Fedorka family

The surname Fedorka was first found in Volhynia, the eastern province of Poland which has changed hands throughout history so many times between Russia and Poland. Mostly populated by Ruthenians or Ukrainians, there are only 16% Poles and a like number of Jews. There are many Polish landowners and nobility. The main towns are Luck, Ostrog, Rowno, Dubno and Kowel.

Early History of the Fedorka family

This web page shows only a small excerpt of our Fedorka research. Another 112 words (8 lines of text) covering the years 1661, 1700, and 1782 are included under the topic Early Fedorka History in all our PDF Extended History products and printed products wherever possible.

More information is included under the topic Early Fedorka Notables in all our PDF Extended History products and printed products wherever possible.

Migration of the Fedorka family

Some of the first settlers of this family name or some of its variants were: Tomko Fedorchuk, his wife Yelena and their three children, who arrived at Halifax, Nova Scotia in 1897; Stephan Fedorczich, who arrived in New York, NY in 1892.