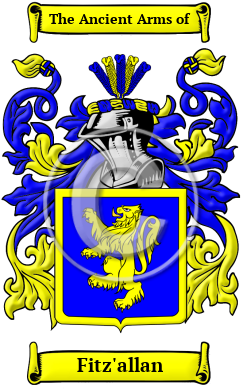 Early Origins of the Fitz'allan family

The surname Fitz'allan was first found in Shropshire the surname is descended from the tenant of the lands of Oswaldestre who was recorded in the Domesday Book census of 1086. He also held Mileham in Norfolk. Baron FitzFlaald (Alain) was descended from Alain FitzFlaald (his father or grandfather) in Dol and Dinan in Brittany. He was the Sire of Dinan. He must also have been direct kin of Count Alain the Red and Count Alan the Black who received so many estates from the Conqueror. It is believed he was a grandson of William the Conqueror. [1]

Early records revealed an early entry for the family at Shrawardine in Shrewsbury. "Shrawardine Castle was built by Alan, a follower of the Conqueror's, and ancestor of the celebrated Fitz-Alans, which family held it under the crown for many ages to check the invasions of the Welsh. After having been the scene of many remarkable events, it was purchased in the reign of Elizabeth by Lord Chancellor Bromley." [2]

At one time, the family held Linchmere in Sussex: "Linchmere was held as of the honour of Arundel, by William de Perci, at an early period, and afterwards became the property of the family of Fitzalan." [2]

Askham-Bryan, or Great Askham in the West Riding of Yorkshire "derives its name partly from Bryan Fitz-Alain, who held it of the honour of Richmond, paying 5s. per annum to the warden of the castle of that town." [2]

Early History of the Fitz'allan family

Since the Old and Middle English languages lacked definite spelling rules, Breton surnames have many spelling variations. Latin and French, which were the official court languages, were also influential on the spelling of surnames. The spelling of surnames was rarely consistent in medieval times, and scribes and church officials recorded names as they sounded rather than adhering to any specific spelling rules. Therefore, it was common to find the same individual referred to with different spellings of their surname in the ancient chronicles. Moreover, a large number of foreign names were brought into England after the Norman Conquest, which accelerated and accentuated the alterations to the spelling of various surnames. The name has been spelled FitzAlan, FitzAlain, FitzFlaald, FitzAllan, FitzAllen, FitzAlen and many more.

Notable of this family during the Middle Ages was Brian FitzAlan Lord of Bedale (d. 1306), descended from a younger branch of the Counts of Brittany and Earls of Richmond; Richard FitzAlan, 10th Earl of Arundel (c.1306-1376), English nobleman; medieval military leader, Richard FitzAlan, 11th Earl of Arundel (1346-1397), English medieval nobleman, military commander and Thomas FitzAlan (died 1430), medieval English knight; and Thomas Fitzalan, 12th Earl of Arundel and 10th Earl of Surrey (1381-1415), an English nobleman, one of the principals of the deposition of Richard II, and a major figure during the reign of Henry IV, when 16 his...
Another 377 words (27 lines of text) are included under the topic Early Fitz'allan Notables in all our PDF Extended History products and printed products wherever possible.

Migration of the Fitz'allan family

Some of the first immigrants to cross the Atlantic and come to North America carried the name Fitz'allan, or a variant listed above: the name represented in many forms and recorded from the mid 17th century in the great migration from Europe. Migrants settled in the eastern seaboard from Newfoundland, to Maine, to Virginia, the Carolinas, and to the islands..