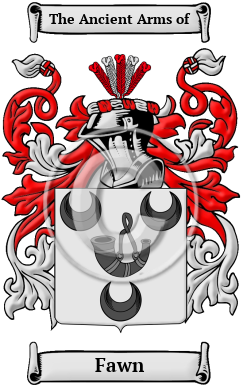 Early Origins of the Fawn family

The surname Fawn was first found in Berwickshire on the eastern part of English/Scottish Border. However, some of the family were found at Alderwasley in Derbyshire in ancient times. "The Le Foune or Fawne family held lands here in the reign of Henry III., and their heiress intermarried with the Lowes, who obtained a grant of the manor from Henry VIII." [1]

Early History of the Fawn family

This web page shows only a small excerpt of our Fawn research. Another 113 words (8 lines of text) covering the years 1150, 1200, 1691 and 1150 are included under the topic Early Fawn History in all our PDF Extended History products and printed products wherever possible.

More information is included under the topic Early Fawn Notables in all our PDF Extended History products and printed products wherever possible.

Fawn migration to the United States +

Fawn Settlers in United States in the 17th Century

Fawn Settlers in Australia in the 19th Century

Fawn Settlers in West Indies in the 17th Century