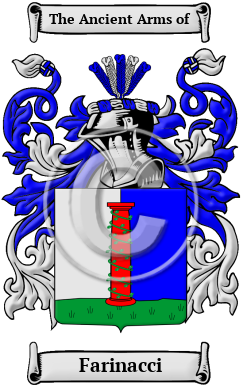 The distinguished surname Farinacci originated in an area of Italy, known as the Papal States. Although people were originally known only by a single name, it became necessary for people to adapt a second name to identify themselves as populations grew and travel became more frequent. The process of adopting fixed hereditary surnames was not complete until the modern era, but the use of hereditary family names in Italy began in the 10th and 11th centuries. Italian hereditary surnames were developed according to fairly general principles and they are characterized by a profusion of derivatives coined from given names. Although the most traditional type of family name found in the region of the Papal States is the patronymic surname, which is derived from the father's given name, names derived from occupations are also found. Occupational surnames, which are less common than other types of surnames in Italy, date back to the feudal era. However, under the Feudal System, occupational names did not become hereditary until the offices themselves became hereditary. It was only after an occupation was inherited by several generations in lineal descent that occupational names came to be applied to entire families, and so became a hereditary surname. The surname Farinacci is a common occupational name for a person who farmed land.

Early Origins of the Farinacci family

The surname Farinacci was first found in the city of Rome, with the ancient Farnese family, noted for their loyalty to the Popes as well as for their wealth, power, and heroic soldiers.

Farinelli (1705-1782) was the stage name of Carlo Maria Michelangelo Nicola Broschi, the celebrated Italian castrato singer of the 18th century and one of the greatest singers in the history of opera. [1]

Early History of the Farinacci family

Italian surnames have a surprising number of forms in comparison with other European surnames because they reflect the regional variations and the many dialects of the Italian language, each of which has its distinctive features. For example, in Northern Italy the most standard Italian surname suffix is "I", whereas in Southern Italy the most typical surname suffix is "O". Sardinian is very different from other forms of Italian and in fact, it is considered to be its own distinct language. Additionally, spelling changes frequently occurred because medieval scribes, church officials, and the bearers of names, spelled names as they sounded rather than according to any specific spelling rules. As a consequence of the major changes in the Italian language and in the local spellings of Italian surnames that occurred over the course of history, there are numerous variations for the surname Farinacci. These spelling variations include Farina, Farini, Farinella, Farinela, Farinelli, Farinetti, Farinola, Farinotti, Farinoni, Farinon, Farinacci, Farinasso, Farinazzo, Farinaro, Farinari, Farinato, Farinati, Farinesi and many more.

Prominent among members of the family was Giau-Bartolo Farina became a distinguished consort of King Carlo V of Naples and Sicily. Vincenzo Farina was 'cappellano' to King Fillipo II. Other prominent members of the Farinacci lineage include Pietro Farnese III, who helped in the Florentine fight against the armies of Henry VII in 1311. In 1354, Pietro Farnese IV freed the city of Bologna. Giulia Farnese was the mistress of Alexander VI of Rome in 1489, and bore a daughter, Laura, who was called "La Bella" because she was one of the most beautiful women in Rome. Alessandro Farnese (1635-1689) was...
Another 113 words (8 lines of text) are included under the topic Early Farinacci Notables in all our PDF Extended History products and printed products wherever possible.

Migration of the Farinacci family

Immigrants bearing the name Farinacci or a variant listed above include: F. Farina, who arrived in New Orleans, Louisiana, in 1823 at the age of 24; Giuseppe Farino, aged 40, who arrived at Ellis Island from Monterosso, in 1905.