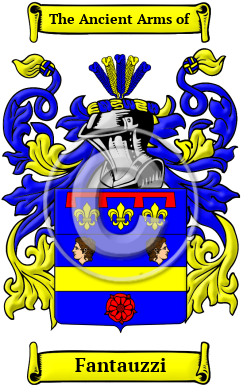 Venice, one of the oldest and most beautiful island regions of Italy, is the esteemed birthplace of numerous prominent families, including the family that bears the surname Fantauzzi. Although people were originally known only by a single name, it became necessary for people to adopt a second name to identify themselves as populations grew and travel became more frequent. The process of adopting fixed hereditary surnames was not complete until the modern era, but the use of hereditary family names in Italy began in the 10th and 11th centuries. Italian hereditary surnames were developed according to fairly general principles and they are characterized by a profusion of derivatives coined from given names. Although the most common type of family name found in Venice is the patronymic surname, which is derived from the father's given name, names derived from occupations are also found. Occupational surnames, which are less common than other types of surnames in Italy, date back to the feudal era. However, under the Feudal System, occupational names did not become hereditary until the offices themselves became hereditary. It was only after an occupation was inherited by several generations in lineal descent that occupational names came to be applied to entire families, and so became a hereditary surname. The surname Fantauzzi is a common occupational name for a person who was a "foot soldier." The earliest origins of this surname have been traced to Bologna, one of the more prosperous cities at this early time. The Fantuzzi family, who moved to the city in 1231, were immediately recognized as nobility and were given seats in the Senate.

Early Origins of the Fantauzzi family

The surname Fantauzzi was first found in Bologna (Latin: Bononia), one of the more prosperous cities at this early time. In 1231 the Fantuzzi family moved to the city and were immediately recognized as nobility and were given seats in the Senate.

Early History of the Fantauzzi family

This web page shows only a small excerpt of our Fantauzzi research. More information is included under the topic Early Fantauzzi History in all our PDF Extended History products and printed products wherever possible.

In comparison with other European surnames, Italian surnames have a surprising number of forms. They reflect the regional variations and the many dialects of the Italian language, each with its own distinctive features. For example, in Northern Italy the typical Italian surname suffix is "i", whereas in Southern Italy it is "o". Additionally, spelling changes frequently occurred because medieval scribes and church officials often spelled names as they sounded rather than according to any specific spelling rules. The spelling variations in the name Fantauzzi include Fanti, Fante, Fant, Fancelli, Fanceto, Fanfani, Fancello, Fancella, Fancel, Del Fante, De Fant, Fantini, Fantino, Fantin, Fantinelli, Fantinato, Fantoli, Fantolini, Fantucci, Fantuzzi, Fantuzzo, Fantuz, Fantus, Fantocci, Fantozzi, Fantoni, Fanton, and Fantacci, Fantazzi and many more.

Prominent among members of the family was Francesco Fanti, mayor of Finale in 1434. In 1435, he assumed the position in Sassuolo. Sigismondo Fanti was an astronomer and famous writer from Ferrara. The Fantini family of Pinerolo owned the feuds of Baldissero, Tavernette, Oliva, and Ceretto for over 3 centuries. Of this family were Giovanni and Giacomo Fantini, both famous judges. Giorgio Fantini was a lawyer and was Chancellor for the Duke of...
Another 73 words (5 lines of text) are included under the topic Early Fantauzzi Notables in all our PDF Extended History products and printed products wherever possible.

Fantauzzi migration to the United States +

Discovered in the immigration and passenger lists were a number of people bearing the name Fantauzzi:

Fantauzzi Settlers in United States in the 19th Century

Fantauzzi Settlers in United States in the 20th Century