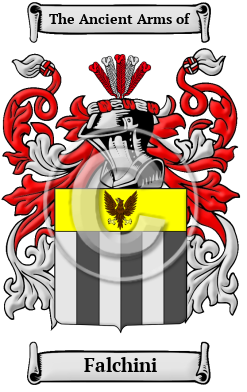 Early Origins of the Falchini family

The surname Falchini was first found in the region of Lombardy, where earliest records date back to the year 1000. At this time, Ettore Falcone and his family moved from Lombardy to the city of Messina, in Sicily.

Early History of the Falchini family

Surnames that originated in Italy are characterized by an enormous number of spelling variations. Some of these are derived from regional traditions and dialects. Northern names, for instance, often end in "o", while southern names tend to end in "i". Other variations come from the fact the medieval scribes tended to spell according to the sound of words, rather than any particular set of rules. The recorded variations of Falchini include Falco, Falchi, Falqui, Falcoz, De Falco, Di falco, Falchetto, Falchetti, Falchetta, Falchini, Falcucci, Falcone, Falconici, Falconetti, Falconi, Falconio, Falchieri and many more.

Prominent among bearers of this family in early times was Giovanni-Antonio Falconi, who gloriously defended Otranto against the Turks in 1480. Placido Falconi was a composer of church music and a member of the Benedictine order in Asola in the mid 16th century. Aniello Falcone was an artist born in 1600, who founded a school of battle painting in Naples. He is also famous for teaching Salvator Rosa. Andrea Falconieri was a prominent composer in Naples around this time. Francesco Falconi was mayor of Sassuolo...
Another 85 words (6 lines of text) are included under the topic Early Falchini Notables in all our PDF Extended History products and printed products wherever possible.

Migration of the Falchini family