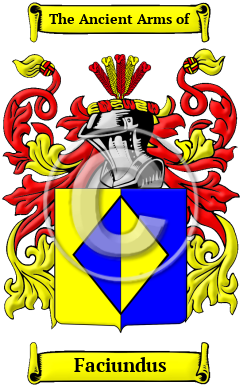 From the ancient and picturesque Italian region of Venice emerged a variety of distinguished names, including the notable surname Faciundus. Although people were originally known only by a single name, it became necessary for people to adopt a second name to identify themselves as populations grew and travel became more frequent. The process of adopting fixed hereditary surnames was not complete until the modern era, but the use of hereditary family names in Italy began in the 10th and 11th centuries. Italian hereditary surnames were developed according to fairly general principles and they are characterized by a profusion of derivatives coined from given names. Although the most traditional type of family name found in the region of Venice is the patronymic surname, which is derived from the father's given name, local surnames are also found. Local names, which are the least frequent of the major types of surnames found in Italy, are derived from a place-name where the original bearer once resided or held land. Often Italian local surnames bore the prefix "di," which signifies emigration from one place to another, but does not necessarily denote nobility. The Faciundus family lived in this area, where the Fazio family lived as early as 1209.

Early Origins of the Faciundus family

The surname Faciundus was first found in Genoa (Italian: Genova), a port on the Gulf of Genoa, capital of the province of Genoa. 4th century B.C it was occupied by the Greeks, destroyed by the Carthaginians in 209 B.C and restored by Rome who made it their headquarters. They survived the Lombard and Carolingan intrusions. Were well known for their naval prowess. Shipbuilding flourished in this natural sea port. Much migration took place to South America pre WWII. In those ancient times only persons of rank, the podesta, clergy, city officials, army officers, artists, landowners were entered into the records. To be recorded at this time, at the beginning of recorded history, was of itself a great distinction and indicative of noble ancestry. The family were nobility in Pavia and in Venice were they seated in 1209. They later branched to Sicily when maestro Giovanni Fazo held a mansion and estates from Frederico II.

Early History of the Faciundus family

This web page shows only a small excerpt of our Faciundus research. Another 68 words (5 lines of text) covering the years 1682, 1400, 1461, 1682 and 1760 are included under the topic Early Faciundus History in all our PDF Extended History products and printed products wherever possible.

Prominent among members of the family was Bartolomeo Fazio, a humanist and historian in La Spezia in 1400. He was also an ambassador and a teacher, and lived in the court of Alfonso I of Naples. He wrote a 10 volume History of Alfonso. Giovanni Fazzari was mayor of Tropea in 1461, and Giuseppe Fazzari was Governor of Reggio, Lipari, and later, of Cosenza and Manfredonia...
Another 66 words (5 lines of text) are included under the topic Early Faciundus Notables in all our PDF Extended History products and printed products wherever possible.

Migration of the Faciundus family