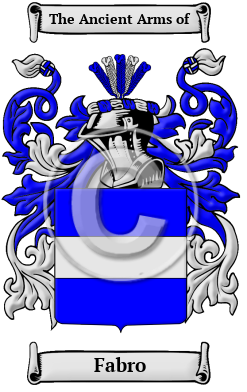 The Italian surname Fabro is derived from the Latin word "faber," meaning "craftsman," and as such, it was likely an occupational name first born by someone who was an iron worker, or some kind of craftsman.

Early Origins of the Fabro family

The surname Fabro was first found in Modena (Etruscan: Mutna; Latin: Mutina; Modenese: Mòdna), a city in Emilia capital of the province of Modena. It became Roman in 215 B.C. It was successfully defended by Brutus against Mark Anthony.

Early History of the Fabro family

Prominent among members of the family was Martinus Fabri (died 1400), North Netherlandish composer of the late 14th century, known to be a singer; Felix Fabri (1441-1502), was a Dominican theologian, in 1489 authored a book on the history of Swabia, entitled Historia Suevorum; Gentile da Fabriano, a painter known as the first great master of the Umbrian school, born in Rome in 1360, and did works for the Malatesta family in Brescia; Salvator Fabris (1544-1618) an Italian fencing master from Padua; Girolamo Fabrici, a famous anatomist in Padua in the 16th century; Raphael Fabretti (1618-1700), an Italian antiquary; Annibale Pio...
Another 229 words (16 lines of text) are included under the topic Early Fabro Notables in all our PDF Extended History products and printed products wherever possible.

Fabro migration to the United States +

Fabro Settlers in United States in the 19th Century

Fabro Settlers in Australia in the 19th Century