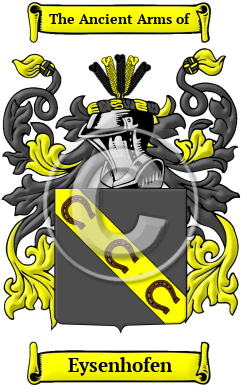 The Eysenhofen family originated in Bavaria, Germany. As hereditary surnames were adopted in that area beginning in the 12th century, people were often identified by the kind of work they did. Eysenhofen is an occupational name for a ironworker or a smith. The distinguished name Eysenhofen is derived from the German word "isen," and the Old German word "isan," which mean "iron." This is also a nickname for a person with a strong will. The second portion of this name, reveals that the original bearer of this name resided in a small settlement. This part of the name is derived from the Old German word "hof," which means settlement, farm or court.

Early Origins of the Eysenhofen family

The surname Eysenhofen was first found in Bavaria, where the family Eisenhofen earned a significant reputation for its contributions to the region's medieval society. Later the family became more prominent as different branches of the same house acquired distant estates. Eisenhut is a mountain in the Central Eastern Alps in Austria and Eisenhut in German literally translates as "iron hat." It was a term frequently used for what is better known as a kettle hat, a type of helmet made of steel in the shape of a brimmed hat. They were common throughout Medieval Europe, but later fell out of favor. They made a comeback in World War I when the British and the U.S. used a variation of the design. In the latter case, they were known as the Brodie helmet.

Early History of the Eysenhofen family

This web page shows only a small excerpt of our Eysenhofen research. Another 67 words (5 lines of text) covering the years 1819, 1525, 1644 and 1702 are included under the topic Early Eysenhofen History in all our PDF Extended History products and printed products wherever possible.

More information is included under the topic Early Eysenhofen Notables in all our PDF Extended History products and printed products wherever possible.

Migration of the Eysenhofen family

The great European flow of migration to North America, which began in the middle of the 17th century and continued into the 20th century, was particularly attractive to those from Bavaria who wished to escape either poverty or religious persecution. For many Bavarian tenant farmers, the chance to own their own land was a major incentive. So the widespread colonization of the United States began in 1650, when many immigrants from Germany settled in pockets in Pennsylvania, Texas, New York, Illinois, and California. In Canada, German settlement centered in Ontario and the prairie provinces. Among those of this surname listed in various historical records were: Magdalena Eisenhofer who arrived in St. Mary, Pennsylvania in 1847; along with other settlers who arrived and established themselves on the eastern coast of the United States and in Canada during the eighteenth and nineteenth centuries..