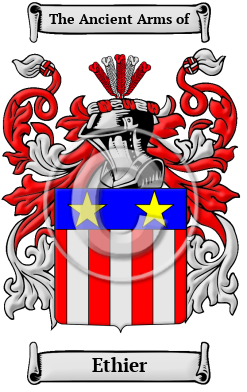 Early Origins of the Ethier family

The surname Ethier was first found in Picardy (French: Picardie) in northern France, where the family was established in early times.

The members of the family took their name from Eth, a parish in the department Nord, in the district of Quesnay. They were also established in other regions of France and of Europe. One branch was registered in Lorraine. Several members of the family distinguished themselves through their various accomplishments.

Georges Ethier, born in 1669, son of Jean and Claire (née Cordier), was a French soldier that travelled to Canada in the 17th century. After arriving in Quebec he married Marie Loiseau, daughter of Lucas and Françoise (née Cure), at Boucherville on 9th February 1699. [1]

Early History of the Ethier family

This web page shows only a small excerpt of our Ethier research. More information is included under the topic Early Ethier History in all our PDF Extended History products and printed products wherever possible.

More information is included under the topic Early Ethier Notables in all our PDF Extended History products and printed products wherever possible.

Ethier migration to the United States +

Ethier Settlers in United States in the 19th Century

Ethier Settlers in Canada in the 17th Century

Ethier Settlers in Canada in the 18th Century