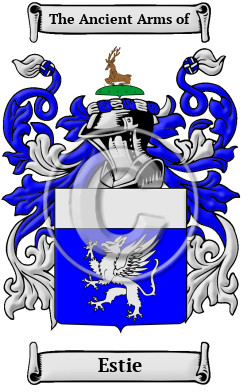 Early Origins of the Estie family

The surname Estie was first found in Kent at Eastry, a civil parish and ancient Saxon village that dates back to at least the 9th century when it was listed as Eastorege. By the time of the Domesday Book of 1086, the place name had evolved to Estrei [1] and literally meant "eastern district or region," from the Old English words "easter" + "ge." [2]

Early History of the Estie family

Before English spelling was standardized a few hundred years ago, spelling variations of names were a common occurrence. Elements of Latin, French and other languages became incorporated into English through the Middle Ages, and name spellings changed even among the literate. The variations of the surname Estie include Eastday, Eastdye, Eastdai, Estday, Estdye and others.

Distinguished members of the family include Mary Towne Eastey (also spelled Esty, Easty, Estey, or Estye) (1634-1692), born Mary Towne in Great Yarmouth, Norfolk. She and her family emigrated to America around 1640 and...
Another 34 words (2 lines of text) are included under the topic Early Estie Notables in all our PDF Extended History products and printed products wherever possible.

Migration of the Estie family