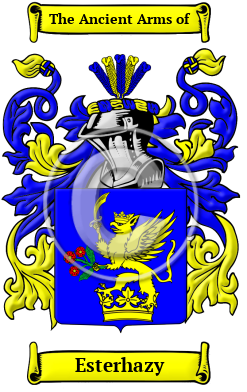 The Esterhazy family name is thought to be habitational, deriving from the name of a now-lost settlement called Esterháza near Dunajská Streda in present day Slovakia.

Early Origins of the Esterhazy family

The surname Esterhazy was first found in southwestern Slovakia, part of the Kingdom of Hungary at the time, where they were low gentry. From 1421 on, they were the owners of a property in Galanta, and Ferenc Zerházy (1563-1594) was elevated to the title of Baron of Galántha. The family further rose in prominence under Count Nikolaus Esterházy (1583-1645) and his son, Prince Paul Esterházy (1635-1713).

Early History of the Esterhazy family

Notable amongst the family name in this era Baron Daniel Esterhazy de Galantha (1585-1654), a Hungarian noble, the founder of the Csesznek branch of the House of Esterhazy; and Pál Esterhazy, Fürst Esterházy von Galantha, (1635-1713), a Hungarian...
Another 37 words (3 lines of text) are included under the topic Early Esterhazy Notables in all our PDF Extended History products and printed products wherever possible.

Migration of the Esterhazy family