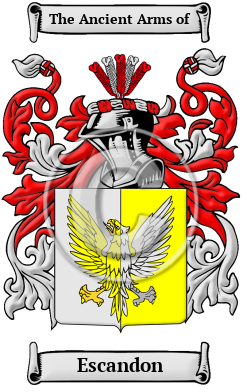 Early Origins of the Escandon family

The surname Escandon was first found in Asturia, in the region of Llanes.

Early History of the Escandon family

This web page shows only a small excerpt of our Escandon research. More information is included under the topic Early Escandon History in all our PDF Extended History products and printed products wherever possible.

Spelling variations of this family name include: Escandon, Escondon, Escandel and others.

Prominent among members of the family was José de Escandón, born in 1700 in Spain, he moved to the Americas in his teens, at age 15 he enlisted as a cadet in a company of cavalry where he rose quickly through the ranks and came to hold the title: "Knight of the...
Another 51 words (4 lines of text) are included under the topic Early Escandon Notables in all our PDF Extended History products and printed products wherever possible.

Escandon migration to the United States +

Escandon Settlers in United States in the 18th Century

Escandon Settlers in United States in the 19th Century