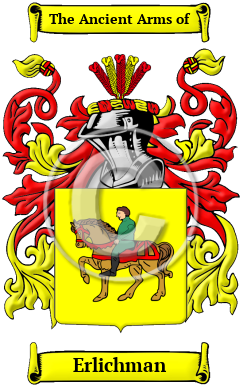 The name Erlichman is a proud symbol of ancient Jewish culture. Before the late Middle Ages, people were known only by a single name. However, as the population increased and travelers set out on their journeys, it became necessary for people to adopt a second name to identify themselves. Jewish hereditary surnames were adopted from a variety of different sources. One of the most common types of Jewish names is the ornamental name. The name Erlichman is a Jewish Ashkenazic ornamental name. Numerous Jewish surnames are ornamental surnames, which are names that have an ornamental value and are not necessarily related to the localities, occupations, nicknames or given names of the first person who used the name. However, ornamental names were often derived from elements that described locations or features of geography, animals and birds, occupations or personal names. In this case, the surname Erlichman comes from the Yiddish word erlekh, which means virtuous and honest. Although some of the variants of this surname, with the first component Ehren, sound similar to the surname Aaron, they belong to this group, which means honest.