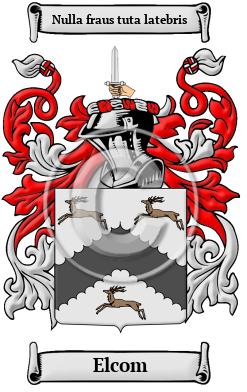 Early Origins of the Elcom family

The surname Elcom was first found in Devon at Ellacombe, a place under the Haldon Hills, where the 'de Ellacombes' were resident in 1306 [1]

In Wiltshire, Elcombe dates back to the Domesday Book of 1086 when it was known as Elecome. [2] Literally, the place name means "valley where elder trees grow," or "valley of a man called Ella." [3]

More recently it is a "tything, in the parish of Wroughton, union of Highworth and Swindon, hundred of Elstub and Everley" [4] but now is a hamlet in Wroughton.

Early History of the Elcom family

Sound was what guided spelling in the essentially pre-literate Middle Ages, so one person's name was often recorded under several variations during a single lifetime. Also, before the advent of the printing press and the first dictionaries, the English language was not standardized. Therefore, spelling variations were common, even among the names of the most literate people. Known variations of the Elcom family name include Ellacombe, Ellicombe, Ellicomb, Ellacomb, Elcom, Elcum, Elcomb, Elacombe, Elacomb, Ellcum and many more.

Distinguished members of the family include Henry Thomas Ellacombe or Ellicombe (1790-1885), English divine and antiquary, son of the Rev. William Ellicombe, rector of Alphington, Devonshire. He originally "applied himself until 1816 to the study of engineering in Chatham Dockyard, under the direction of Brunel. In 1816 he proceeded to the degree of M.A., and was ordained for the curacy of Cricklade, a Wiltshire parish in the diocese of Gloucester. In...
Another 71 words (5 lines of text) are included under the topic Early Elcom Notables in all our PDF Extended History products and printed products wherever possible.

Elcom Settlers in Australia in the 19th Century