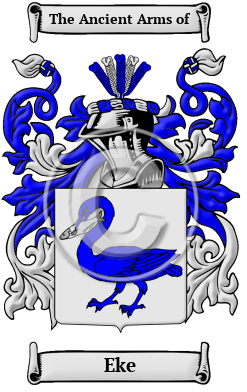 The Eke surname was created from one of several place names in Germany. Most of these were compound names containing the "Eiche" roots, which means "oak."

Early Origins of the Eke family

The surname Eke was first found in Germany, where since medieval times the name Eich was closely associated with the district's most dynamic historical developments. Being prominent in social affairs, the family formed alliances with other distinguished families during the turbulent events of the feudal era.

Early History of the Eke family

This web page shows only a small excerpt of our Eke research. Another 75 words (5 lines of text) are included under the topic Early Eke History in all our PDF Extended History products and printed products wherever possible.

More information is included under the topic Early Eke Notables in all our PDF Extended History products and printed products wherever possible.

Migration of the Eke family

Historic Events for the Eke family +