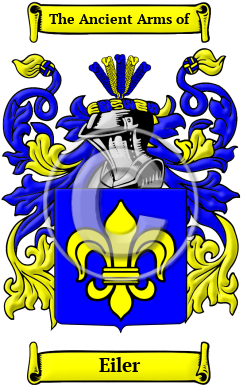 The surname Eiler is a German occupational surname that evolved in the region known as the Rhineland. Germans at first used only one name, but population growth and increased travel in medieval times caused confusion between people of the same name, forcing the people to adopt hereditary surnames. These names often identified people by the kind of work they did. Eiler is a name for a brave warrior. The surname Eiler originally derived from the German words "agil" which means "weapon," and "hard," which means "hard." A broad and miscellaneous class of names, nickname surnames referred to a characteristic of the first person who used the name. They can describe the bearer's favored style of clothing, appearance, habits, or character.

Early Origins of the Eiler family

The surname Eiler was first found in the Lower Rhine region, where the name was anciently associated with the tribal conflicts of the area. They declared allegiances to many nobles and princes of early history, lending their influence in struggles for power and status within the region. They branched into many houses, and their contributions were sought by many leaders in their search for power.

Early History of the Eiler family

This web page shows only a small excerpt of our Eiler research. Another 109 words (8 lines of text) are included under the topic Early Eiler History in all our PDF Extended History products and printed products wherever possible.

Spelling variations of this family name include: Eiler, Eil, Eill, Eyler, Eyll, Eiller, Eyller and others.

More information is included under the topic Early Eiler Notables in all our PDF Extended History products and printed products wherever possible.

In the United States, the name Eiler is the 15,203rd most popular surname with an estimated 2,487 people with that name. [1]

Eiler migration to the United States +

Eiler Settlers in United States in the 18th Century

Eiler Settlers in United States in the 19th Century