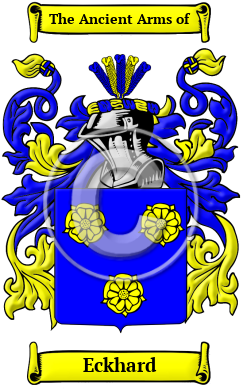 The Eckhard surname comes from a Germanic personal name composed of the elements "agi" meaning "edge" or "point," and "hard," meaning "brave" or "strong."

Early Origins of the Eckhard family

The surname Eckhard was first found in Saxony, where the name contributed greatly to the development of an emerging nation which would later play a large role in the tribal and national conflicts of the area. In later years the name branched into many houses, each playing a significant role in the local social and political affairs.

Early History of the Eckhard family

Prominent bearers of the family name Eckhard at this time were Johannes, Meister ("Master") Eckhart (1260-1327), German theologian, Dominican monk and influential mystic of the period; in 1307 he became vicar-general of Bohemia. Johannes Eccard, born at Mühlhausen in Thuringia in 1553, was probably at first a scholar of Joachim Burgk, and afterwards of Orlando di Lasso at Munich, with whom he went to Paris in 1571. He was for some time in the employ of the Fuggers at Augsburg; in 1583 was made vice-capellmeister, and in 1599 full capellmeister, at Königsberg to the Margrave of Brandenburg. In 1608 he obtained the...
Another 127 words (9 lines of text) are included under the topic Early Eckhard Notables in all our PDF Extended History products and printed products wherever possible.

Eckhard migration to the United States +

Eckhard Settlers in United States in the 18th Century

Eckhard Settlers in United States in the 19th Century

Eckhard Settlers in Canada in the 18th Century