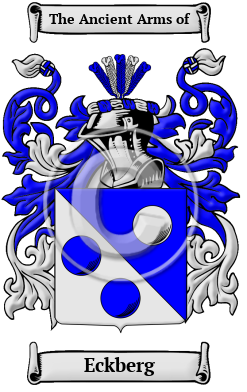 Early Origins of the Eckberg family

The surname Eckberg was first found in Austria and southern Bavaria, where the family was anciently associated with the political and religious conflicts of the area. They declared allegiances to many nobles and princes of early history, lending their influence in struggles for power and status within the region. The family founded numerous branches, many of which acquired manors and estates in surrounding regions, where they contributed to the prosperity of their society. Individual bearers of the name first mentioned in ancient chronicles include Heinrich auf dem Egg, who lived in Tyrol around 1297.

Early History of the Eckberg family

This web page shows only a small excerpt of our Eckberg research. Another 323 words (23 lines of text) covering the years 1692, 1741, 1760, 1785, 1801, and 1815 are included under the topic Early Eckberg History in all our PDF Extended History products and printed products wherever possible.

Many cultural groups lived in the German states in medieval times. Each had its own dialect and traditions, and unique variations of popular names. Low German, which is similar to contemporary Dutch, was spoken in Westphalia. German names are characterized by additions such as regional suffixes and phrases that tell something about the origin or background of its original bearer. Further contributing to the variation in German names was the fact that there were no spelling rules in medieval times: scribes recorded names according to their sound. The recorded spelling variations of Eckberg include Egger, Egg, Eggener, Egener, Eggere, Eggerer, Ecger, Ecgere, Eggen, Egen and many more.

Another 40 words (3 lines of text) are included under the topic Early Eckberg Notables in all our PDF Extended History products and printed products wherever possible.

Migration of the Eckberg family

Austria was made a republic after the First World War. The Austro-Hungarian Empire was broken up by the Treaty of Versailles and many of its people found themselves in the new nation of Czechoslovakia. Many other Austrians and expatriate Austrians made their way to North America in the 20th century. Most landed in Philadelphia, later continuing on to the states of Ohio, Texas, Illinois, California, New York, and Maryland. Some Austrian settlers also went to western Canada and Ontario. Research into the origins of individual families in North America revealed records of the immigration of a number of people bearing the name Eckberg or a variant listed above: Peter Egger, who came to Carolina in 1722 with his wife Verena Gillmann and their children. Johann Matheis Egener arrived in Philadelphia in 1727; Christoph Egen landed there in 1738.