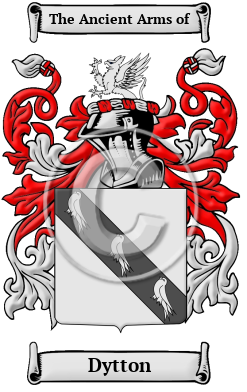 Early Origins of the Dytton family

The surname Dytton was first found in Lancashire at Ditton, a township, in the parish and union of Prescot, hundred of West Derby. "The manor was held, in the reign of Edward III., by various families, of whom Thomas de Ditton performed suit and service to the county and wapentake for a fourth part." [1]

Early History of the Dytton family

Spelling variations of this family name include: Ditton, Diton, Dytton, Dyton, Dighton and others.

Distinguished members of the family include Humphry Ditton (1675-1715), an English mathematician from Salisbury, through the influence of Isaac Newton, was elected mathematical master in Christ's Hospital. He was born at Salisbury on 29 May 1675, being, it is said, the...
Another 41 words (3 lines of text) are included under the topic Early Dytton Notables in all our PDF Extended History products and printed products wherever possible.

Migration of the Dytton family