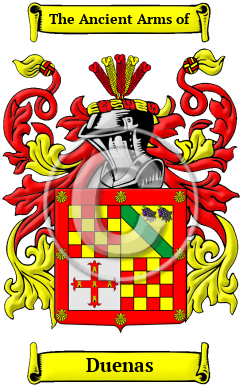 The distinguished Spanish surname Duenas appears to be of local origin, being derived from the name of a place where a man once lived or where he once owned land. This place name is believed to be derived from the Spanish word "duenas" (from the Latin Dominus, lord), which is the feminine form of "duenos," and means "proprietresses or heiresses," and may have been originally used to describe an area owned by an heiress, or where a few heiresses lived.

Early Origins of the Duenas family

The surname Duenas was first found in the province of Palencia, in the region of Leon. Some say that the lands of Duenas were owned by Isabel, daughter of Isabel and Ferdinand, the Catholic monarchs of the fifteenth and sixteenth centuries.

Early History of the Duenas family

This web page shows only a small excerpt of our Duenas research. Another 71 words (5 lines of text) covering the years 164 and 1642 are included under the topic Early Duenas History in all our PDF Extended History products and printed products wherever possible.

Spelling variations of this family name include: Duenos, Dueñas, Dueña, Duena and others.

In the United States, the name Duenas is the 5,548th most popular surname with an estimated 4,974 people with that name. [1]

Duenas migration to the United States +

Duenas Settlers in United States in the 19th Century