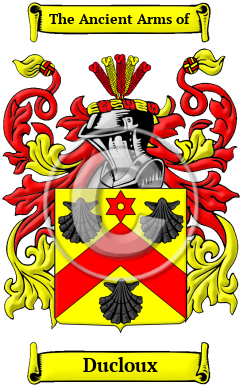 Early Origins of the Ducloux family

The surname Ducloux was first found in Lorraine.

Early History of the Ducloux family

Spelling variations of this family name include: Duclos, Ducloux, Duclaux, Duclaud and others.

Notable in the family name was Marie-Anne de Chateauneuf, Mrs Duclos, born in 1668 in Paris, who quickly gained fame with her natural talents as an opera singer; Gabriel Duclaux was a painter in Grenoble and is recorded at his marriage in 1678; Jean-François was a lawyer at the parliament in Toulouse in 1705; Antoine-Jean Duclos was an engraver in Paris in 1742; Joseph-Louis Duclaux was a politician in 1746; Antoine du Pouget Duclaux was a Sulpicien monk in Cievrac in 1749; Charles Duclos was a lawyer who was honored with noble...
Another 91 words (6 lines of text) are included under the topic Early Ducloux Notables in all our PDF Extended History products and printed products wherever possible.

Migration of the Ducloux family

Some of the first settlers of this family name or some of its variants were: 200 individuals of the lineage who arrived from France to Canadian shores between 1600 and 1900. Most of them arrived during the nineteenth century, but some came earlier, such as Francois Duclos, who was married in 1665 in Trois-Riviè.