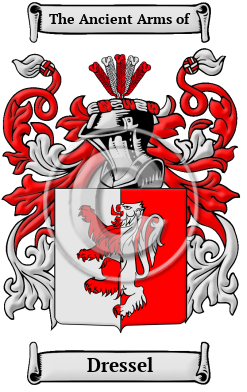 The name Dressel derives from a few different sources. In some instances, it was a local surname, derived from a place named Dreshcer in the region of Thuringia. In the Holy Roman Empire, hereditary surnames derived from localities became increasingly widespread. Dressel was also an occupational surname derived from the word German word "drescher," which denotes a thresher of grain. As surnames began to be used, many adopted the name of their feudal occupation as their surname.

Early Origins of the Dressel family

The surname Dressel was first found in Thuringia, where the name emerged in mediaeval times as one of the notable families of the region. From the 13th century the surname was identified with the great social and economic evolution which made this territory a landmark contributor to the development of the nation.

Early History of the Dressel family

Notable members of the surname Dressel in this period were Gallus Dressler (1533-1580), a German composer and music theorist who served as Kantor in the church school at Magdeburg; and Georg Drescher von Caden, who was the Mayor of Hirschberg in 1728. Ernst Christoph Dressler (1734-1779) was a German composer, operatic tenor...
Another 51 words (4 lines of text) are included under the topic Early Dressel Notables in all our PDF Extended History products and printed products wherever possible.

Dressel migration to the United States +

Dressel Settlers in United States in the 18th Century

Dressel Settlers in United States in the 19th Century