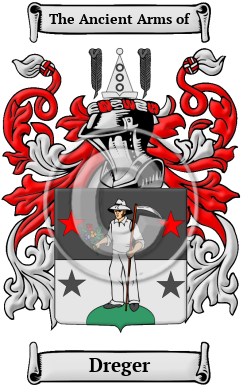 The distinguished surname Dreger is of German origin. The name is derived from the Old Germanic word "Dreier," literally meaning "a group of three," which generally referred to a local committee made up of three people which passed laws for the local townships; it is likely that the progenitor of the name was a member of such a group. Alternatively, the name may be derived from "Dreher," meaning "lathe-hand or turner"; in this instance, the name would have been originally borne by a practitioner of this profession.

Early Origins of the Dreger family

The surname Dreger was first found in Bavaria, where the name was closely identified in early medieval times with the feudal society which would become prominent throughout European history. The name would later emerge as a noble family with great influence, having many distinguished branches, and become noted for its involvement in social, economic and political affairs. The origins of the name make it likely that several branches of the family emerged independently during this early period. The first known bearer of the name was L. Dreghere, who lived in Hannover in 1348.

Early History of the Dreger family

This web page shows only a small excerpt of our Dreger research. Another 98 words (7 lines of text) covering the years 1610, 1688, and 1789 are included under the topic Early Dreger History in all our PDF Extended History products and printed products wherever possible.

Another 30 words (2 lines of text) are included under the topic Early Dreger Notables in all our PDF Extended History products and printed products wherever possible.

Dreger Settlers in Canada in the 20th Century