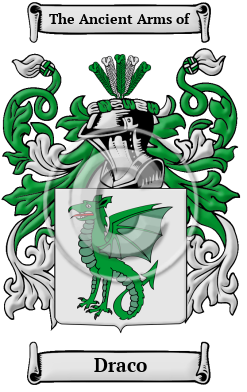 The distinguished surname Draco originated in an area of Italy, known as the Papal States. Although people were originally known only by a single name, it became necessary for people to adapt a second name to identify themselves as populations grew and travel became more frequent. The process of adopting fixed hereditary surnames was not complete until the modern era, but the use of hereditary family names in Italy began in the 10th and 11th centuries. Italian hereditary surnames were developed according to fairly general principles and they are characterized by a profusion of derivatives coined from given names. The most traditional type of family name found in the region of the Papal States is the patronymic surname, which is derived from the father's given name. During the Middle Ages, Italians adopted the patronymic system of name-making because it perfectly complemented the prevailing Feudal System. In Italy the popularity of patronymic type of surname is also due to the fact that during the Christian era, people often named their children after saints and biblical figures. The surname Draco came from the word drago which means dragon. The surname is derived from the Latin medieval name Draconis which is derived from a word which means dragon.

Early Origins of the Draco family

The surname Draco was first found in Genoa (Italian: Genova), a port on the Gulf of Genoa, capital of the province of Genoa. 4th century B.C it was occupied by the Greeks, destroyed by the Carthaginians in 209 B.C and restored by Rome who made it their headquarters. They survived the Lombard and Carolingan intrusions. Were well known for their naval prowess. Shipbuilding flourished in this natural sea port. Much migration took place to South America pre WWII. In those ancient times only persons of rank, the podesta, clergy, city officials, army officers, artists, landowners were entered into the records. To be recorded at this time, at the beginning of recorded history, was of itself a great distinction and indicative of noble ancestry.

Early History of the Draco family

Prominent among members of the family was Dipoldo Dragoni, a nobleman born in 1221 in Terra di Lavoro, Giovanni Battista Dragoncino, an artist in Urbino in the 15th century, Luigi Drago, a respected lawyer in Nizza in 1520, Giovanni Andrea Dragoni (or Draconi, c. 1540-1598), an Italian composer of the Roman School of the late Renaissance; Gioia Dragomanni, bishop of Monte Peloso around this time, Giacinto Dragonetti, a poet in L'Aquila around...
Another 72 words (5 lines of text) are included under the topic Early Draco Notables in all our PDF Extended History products and printed products wherever possible.

Migration of the Draco family

Some of the first settlers of this family name or some of its variants were: Francesco-Paolo Drago, age 25 who arrived in New York March 8; 1882 aboard The Orsola, Joe Drago, who was recorded in Louisiana between the years 1989-1910.