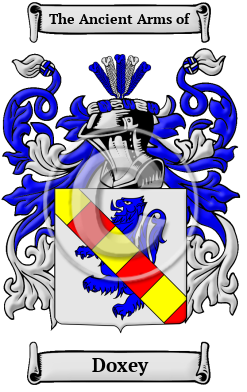 Early Origins of the Doxey family

The surname Doxey was first found in Staffordshire at Doxey, a village and civil parish that dates back to at least the Domesday Book where it was listed as Dochesig, land held by the Bishop of Chester. At that time it was part of Seighford and had land enough for three ploughs. [1]

Doxey Pool is a small pool of water and legend claims it is inhabited by a mermaid called Jenny Greenteeth who apparently fell in the pool on a foggy day and since then she has been enticing victims to their watery grave in the pool. One of the first listings of the name was in the year 1210 when Hugh de Dockesey held estates in that shire. [2]

Early History of the Doxey family

This web page shows only a small excerpt of our Doxey research. Another 78 words (6 lines of text) covering the years 1273, 1455 and 1487 are included under the topic Early Doxey History in all our PDF Extended History products and printed products wherever possible.

Spelling variations of this family name include: Dox, Docks, Doxey, Docksey, Docksie, Dorksey and many more.

More information is included under the topic Early Doxey Notables in all our PDF Extended History products and printed products wherever possible.

In the United States, the name Doxey is the 16,970th most popular surname with an estimated 2,487 people with that name. [3]

Doxey migration to the United States +

Doxey Settlers in United States in the 17th Century

Doxey Settlers in Australia in the 19th Century

Historic Events for the Doxey family +