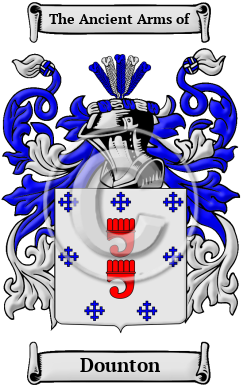 Early Origins of the Dounton family

The surname Dounton was first found in Wiltshire at Downton, a village and civil parish on the River Avon that dates back to Roman times where in 1953 the site of a Roman villa was discovered there. Moving ahead in time, the Saxons held the area c. 672 when it was listed as Duntun. [1]

More than 400 years later, the Domesday Book of 1086 lists the place name as Duntone. [2] The Manor House in Downton is generally thought to be the longest inhabited house in the South of England as it has been in use since c. 850.

There are two other locals named Downton: a civil parish in Herefordshire that contains the village of Downton-on-the-Rock; and a hamlet in Hampshire. Downton literally means "hill settlement" or "farmstead on or by the hill or down." [1]

Early History of the Dounton family

This web page shows only a small excerpt of our Dounton research. Another 60 words (4 lines of text) covering the years 161 and 1615 are included under the topic Early Dounton History in all our PDF Extended History products and printed products wherever possible.

Spelling variations of this family name include: Downton, Dounton and others.

More information is included under the topic Early Dounton Notables in all our PDF Extended History products and printed products wherever possible.

Migration of the Dounton family